PlanLocal: Street Space is an open crowd source mapping initiative to help generate and share ideas about creating safer streets. Check out the map to see what participants suggested or double click on a location to suggest a new improvement. Press ⊕ on the map to find your current location. 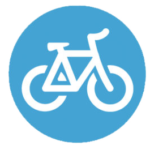 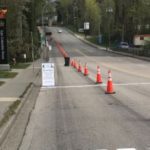 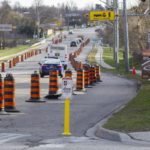 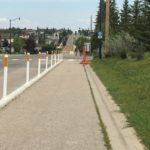 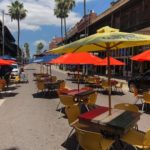 Cumberland should have a barriers at Sherman preventing vehicles from cutting through from Lawrence Road to Charlton Avenue(local traffic only). Leaving more space on the road for runners cyclists and people out walking their dogs.

During the pandemic Cumberland has become a critical pedestrian and cyclist corridor. A high volume of people crowd the sidewalk and spill out onto the street in order to maintain proper distance. Family's riding bikes travel from the rail trail along Cumberland to Gage park and contend with impatient drivers that give little space when aggressively passing between Stop signs.

Why do we need another East-West cut through for car traffic? Aren't Main, King, Cannon, Wilson, Delaware, Barton, and Burlington enough?

Currently and estimated 1/4 to 1/3 of the students at Templemead leave the schoolyard using the pathway in the pictures. In addition, a large amount of vehicular traffic travels on Templemead as a minor collector roadway. This area has parking on both sides of the street, which is also used by parents as the lot at Templemead fills up quickly at pickup and drop off times. Often it is hard to see the children coming out of the schoolyard due to parked cars, and the kids are excited to be going home often running into the intersection carefree.

We would like to see the Traffic Calming Policy enacted in this neighbourhood, bringing the speed limit to 30km/h from Arno to Golden Gate Ave, as well as 1 side of the street parking from Arno to Mount Pleasant. In addition, it is our belief that a crossing guard at this location is appropriate due to the volume of both vehicular and student traffic at this small intersection. (Please note, since the Google Maps picture attached was taken, the intersection has been updated with zebra stripe crossing lines, but they are often not being handled correctly by drivers.)

We would like to see the Traffic Calming Policy enacted in the Templemead neighbourhood, including but not limited to:

1. An immediate reduction of speed to 30km/h along Templemead from GoldenGate Ave to Arno, and all of Royal Vista east of Upper Gage representing approximately 150m from the corners of school property;

2. A speed hump installed on Royal Vista approaching Templemead, as well as one on Templemead approaching the intersection at the front of the school.

3. Single side of the street parking in the newly signed school zone, opposite the school.

4. A crossing guard installed at Arno and Templemead (This is its own point on the map now).

And any other safety enhancements the Traffic Calming Policy would suggest.

To avoid position jockeying at this intersection the following improvements are suggested:

1. Red Light Camera to be installed both North and South Facing. Currently there is only one on the SouthWest corner facing East.

To promote safety for students and other pedestrians, the following changes to this intersection are suggested:

1. To put the speed limit to 40k not 50k in a school crossing area, about half the kids that go to Templemead cross at this intersection;

4. Because speed in this area is so bad, we would like to suggest a speed table at this intersection;

7. And a radar speed sign reminding southbound traffic to slow down. Often these drivers have just exited the Linc and forget their in a school zone.

These suggestions should be used or considered immediately at this intersection as a response to community involvement following the tragedy that befell this neighbourhood and then a city wide amendment to the Traffic Calming Policy to allow for appropriate modifications to arterial routes should be written. The city should also be required to give an estimated timeline on rolling out the Traffic Calming Policy city wide, using the ASE funds to ensure timely protection for our most vulnerable walking commuters.

To promote safety for students and other pedestrians, the following changes to this intersection are suggested:

1. To put the speed limit to 40k not 50k in a school crossing area, about half the kids that go to Huntington cross in this section either at Broker Dr (Controlled with a light and crossing guard) or at 10th Ave (Controlled by crossing guard only). This would be a continuation of the 40k zone that currently ends at Mohawk Road. The current configuration protects students at Highview Elementary and Sherwood High School but not at St. Margaret Mary's Elementary and Huntington Park Elementary.

4. And a radar speed sign reminding southbound traffic to slow down. Often these drivers have just exited the Linc and forget their in a school zone.

5. Installation of a push-button lit cross-walk at 10th Avenue.

These suggestions should be used or considered immediately at this intersection as a response to community involvement following the tragedy that befell this neighbourhood and then a city wide amendment to the Traffic Calming Policy to allow for appropriate modifications to arterial routes should be written. The city should also be required to give an estimated timeline on rolling out the Traffic Calming Policy city wide, using the ASE funds to ensure timely protection for our most vulnerable walking commuters.

Widen the area for passengers to wait for the bus. This can be done by taking some space from the parking lot in behind.

Widen the space for passengers to wait for the bus. This can be done by taking some space from the parking lot in behind.

Install a pedestrian crossover so pedestrians can safely cross here rather than having to go to either Tisdale or Wentworth.

Install a pedestrian cross-over at the foot of the stairs to the rail trail. Also consider changing to two-way so that cars will actually come to a complete stop at Young and Victoria.

A pedestrian crossing or full light with pedestrain crosswalk is need.

Widen the sidewalk on the north side. Consider changing to two-way traffic. Needs traffic calming - cars race to get to the stop sign at Victoria (which they then ignore).

Make part of Barton pedestrian only for the summer months. Widen sidewalks through BIA.

Best place to safely walk is on the bike lanes - Need more room for pedestrians.

From the 403 ramps to Plains Rd there is buffer space to add concrete barrier protection to the bike lanes to create safe shared spaces. Sidewalks in this area are narrow and biking beside this heavy traffic with no protection is dangerous.

Add concrete barriers to the buffer space of the York Blvd Bike lanes from Dundurn to Hess.

Considering removing on street parking on Longwood's east side to convert into a pedestrian space/shared space from Marion to Franklin. Currently this street is heavily trafficked by families and the narrow sidewalks make users have to enter the street to avoid others. The northbound bikelane is disrupted by parking making it unsafe for children. This street serves as an important connection to both the Waterfront Trail and the Food Basics.

Longwood Bridge and beyond Cycling Walkability

Narrow Northbound traffic to 1 lane converting 1 lane to shared pedestrian/cyclist space from Frid St to Main St. Currently there is only one narrow sidewalk and I have had to step onto the busy street to get around a stroller here. Furthermore, the bike lanes do not continue over the bridge and cyclists must navigate aggressive traffic.

Remove on street parking to create protected multi-use space for cyclists/pedestrians. This is a highly trafficked street with narrow sidewalks. It also serves as an important connection to the rail trail

Convert one eastbound lane of Cootes Dr to a protected multiuse space. This could connect Cootes Dr Trail to Dundas safely as currently users must navigate narrow sidewalks on Cootes from Dundas St to Main St and cyclists must merge with traffic. This should connect to a pedestrian/cyclist lane on King St through Dundas that could be created from removing on street parking.

Consider narrowing Cootes Dr Southbound to 2 lanes converting 3rd lane to cyclist/pedestrian space. South of Main St, Leland could be narrowed to create a cyclist/pedestrian space on the west side of the street to connect Cootes to the Rail Trail. Currently this is a heavily trafficked area because of its many connections but sidewalks are narrow and cyclists must navigate traffic.

Remove Parking on (at least one side of) King st to create a protected cyclist/pedestrian space. On Cootes dr, traffic should be narrowed by one lane to connect this path to the Cootes trail

Fully separate and add protection to these bike lanes. They could be an important access route to HHS hospitals on Barton but currently are not visibly separate from traffic.

Convert one lane of traffic to protected active transportation space using concrete curbs or barriers. Outside a Fortinos, this is a heavily traffic block with thin sidewalks. This block is also a truck route and has very poor asphalt making it extremely unsafe for cyclists connecting the Dundurn bike lanes north of King and south of Main.

Pedestrian activated crosswalk or even yield signal for cyclists and pedestrians to safely cross onto/off of the protected King St bridge. An active transportation space is only as safe as its weakest link.

In front of family court. Walkability

Expand side walk, convert a lane of traffic.

Permanent seating area with semi-circular bench seating, child-friendly sculptures and murals, solar lights, accessibility pathing, and well-protected security devices for those who feel endangered after hours would safely repurpose this space and make it useable to the whole public.

Extend the West 5th bike lanes north of Mohawk and connect them to the forthcoming Claremont Access bike lanes.

Wellington and Victoria are both overbuilt for the volume of traffic they carry. Remove one lane on each to create north-south bike lanes.

Temporarily close one lane of traffic on each side of Aberdeen Ave for Cyclists and Pedestrians. These sidewalks are heavily traffic by employees of St.Joes walking to work. At the present, there is no way to keep distance from one another.

Use that space to create wider sidewalks or multi use paths for East west pedestrian walking.

Bike lane to ride downtown without being on crowded road

Dedicate lane space to help with active transportation links between mountain and downtown.

Repurpose lane space to give more options for pedestrians and cyclists to move between upper and lower city.

Provide lane space to help with active transportation between the mountain and lower city employment areas.

Demolish and start over?

With the closure of Centennial Park, there are no safe bicycle connections through this stretch of North Service Road.

Dedicate one traffic lane for pedestrians and cyclists.

Close to traffic for restaurant patios.

Reduce one lane on each side to give more width on sidewalks to pedestrians.

Reduce one lane on each side to give more width on sidewalks for pedestrians.

Close a section of the street to traffic for the summer.

Close to traffic for the summer.

Allow parking on both sides of the street to slow traffic.

Make this a pedestrian area.

More Details
Previous Next
Page 1 of 1